Reading article 14 TML, we understand that a WKTM is a trademark that is extensively used and advertised, and enjoys high reputation in its field…

Chinese Trademark Law (TML) does not give a precise definition but it can be easily implied from the requirements posed for its recognition. Reading Article 14 TML, HFG Law & Intellectual Property it is understood that a WKTM is a trademark that is extensively used and advertised, and enjoys high reputation in its field[i].

Why Is Having A Well-Known Trademark Important?

From a merely legal point of view – leaving apart marketing considerations – the well-known trademark is a super hero, in the sense that it has “special powers” that “normal” trademarks don’t have. Such special powers are described in Article 13 of TML and are different, based on the fact that the WKTM is already registered or not in China. Provided below is a graphic representation to better explain the statute of rights or scope of protection granted to registered or unregistered WKTM. 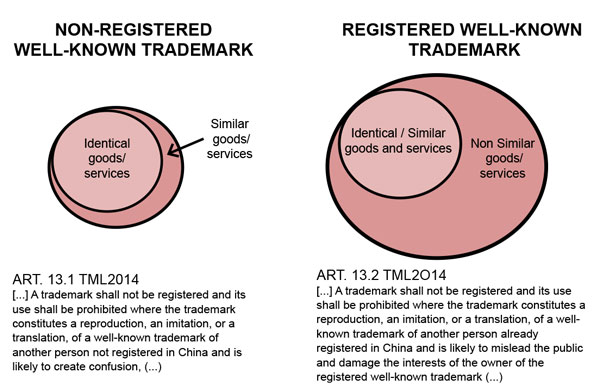 A Well-Known Trademark That Is Not Registered In China Must Be Protected For Goods That Are Identical Or Similar To The Goods For Which The WKTM Is Famous.

Special powers consist in obtaining a protection identical to that granted to a registered trademark in the lack of registration and this is a big exception. Indeed a nonregistered and non-WKTM has almost zero rights. In any case, it is to be noted that having a non-registered WKTM is a very rare circumstance: the trademark shall be reputed, widely used and advertised, but its owner has not applied and registered it as a trademark.

More interestingly, the second part of Article art.13 takes into consideration the case of a Well-Known Trademark that is already registered. In such case, the special power granted is the so-called cross-class protection.

The Registered Well-Known Trademark Can Be Protected Not Only Against Identical Or Similar Goods But Also Against Non-Similar Goods And Services.

And this is quite simple, but it is not exhaustive.

According to prevailing jurisprudence, WKTM in China is not protected against all non-identical goods or services but the protection is graded. The more the trademark is wellknown, the wider shall be the scope of its protection against non-similar goods or services.

In the figure, the scope of protection of a hypothetical WKTM in the field of fashion (Class 25 as the center) has been represented. The core represents the class in which the goods for which the trademark is well-known. 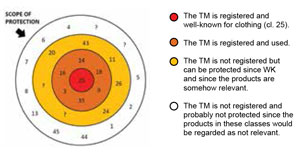 The second circle (brown color) includes the goods/services (classes) in which usually the WKTM is used and registered, but it is not well-known for.

The third circle (orange color) represents the goods/services in which the WKTM would obtain protection even if not registered.

The last and most external circle represents the goods/services (classes) in which the WKTM would not receive protection because they are too far from the core and therefore not relevant.

The circles given in the figure above try to explain the scope of protection of WKTM in China: it can extend cross-class but cannot extend to all classes. The level of protection is proportionate to the level of “well-known-ness” and limited by the relevancy of the alleged infringing product. While ascertaining infringement of WKTM in a class in which it is not registered would evaluate if there is likelihood of confusion and damage to the trademark owner.

Example 1: The Ferragamo trademark was recognized wellknown by TRAB (Trademark Review and Adjudication Board) in 2016 in a dispute against an identical trademark filed in 2012 for lighting apparatus in Class 11 (No.9372234).

The opposed trademark is designated on “glasses, glasses frames” and other products, while LEGO’s “LEGO” and “Lego in Chinese characters” trademarks (“cited trademarks”) are well-known for “toy” products in class 28. If the opposed trademark is used on “glasses, glasses frames” and other products, the relevant public would think that they are to a high extent connected to one another, thus diminishing the distinctiveness of the cited trademarks and damaging the interests of LEGO.(2017) Jing XingZhong No. 875.

This article was originally published on legaleraonline.com by our IP expert Fabio Giacopello.

Register For This Site

Your IP Insider is the blog of the China and South-East Asia IPR SME Helpdesks, two projects are an initiative of the European Commission, which provide free information and services for European Small and Medium-sized Enterprises (SMEs) to both protect and enforce their intellectual property rights (IPR) in China and South-east Asia respectively. Through contributions from experts within the field and the project team members, Your IP Insider discuss IPR developments in China and South-east Asia, and how these affect European companies. We provide practical information on how you can develop your business’ IP strategy with simple, cost-effective measures.